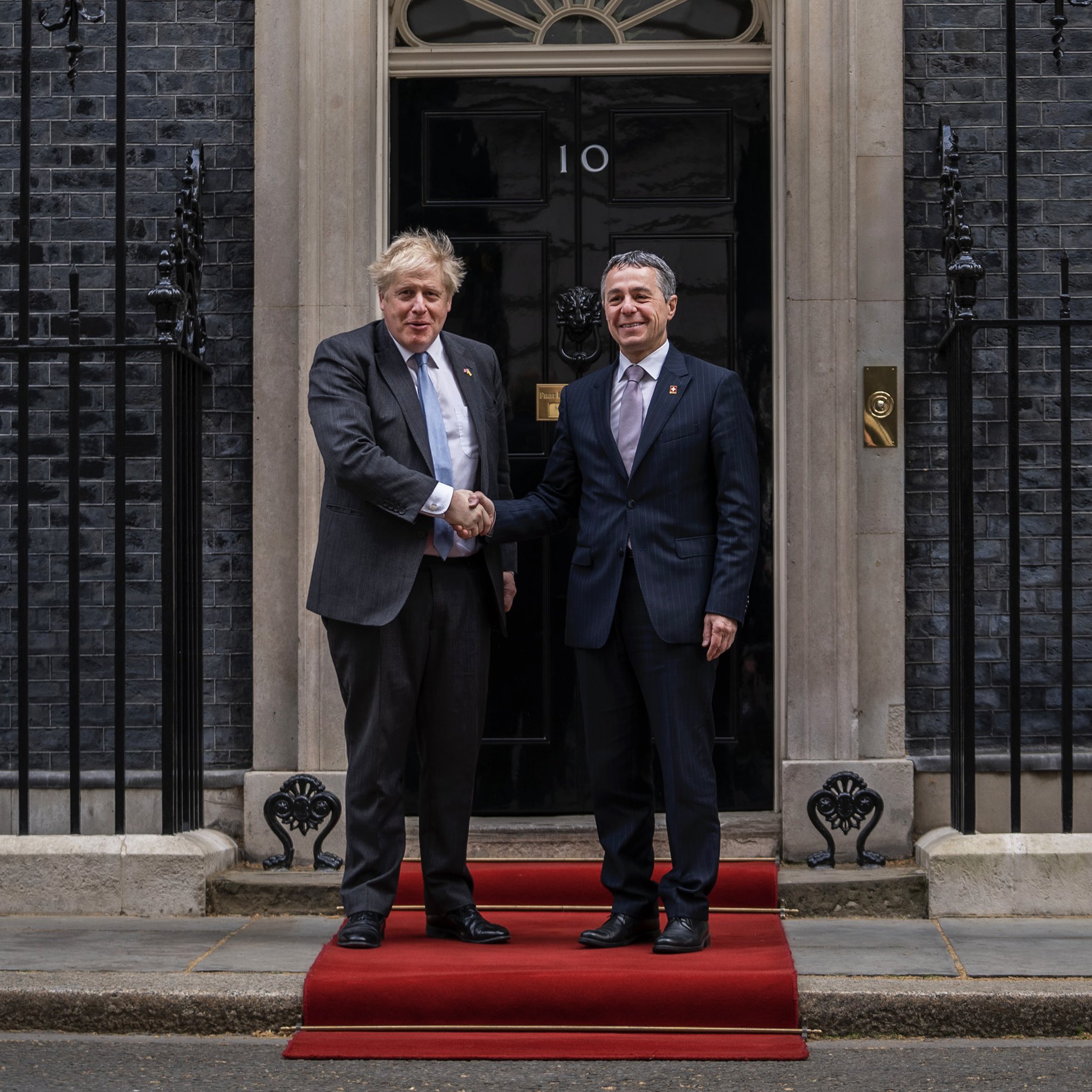 President of the Swiss Confederation visits the UK

President of the Swiss Confederation visits the UK

Switzerland and the United Kingdom signed a joint declaration on the further development of their bilateral partnership and agreed to deepen cooperation in the field of science. They confirmed the launch of exploratory talks to modernise the existing trade agreement. Key topics of discussion included Russia’s military aggression against Ukraine and its consequences, as well as Switzerland's and the UK's relations with the European Union.

The declaration signed by President Ignazio Cassis and Prime Minister Boris Johnson sets out the direction in which bilateral relations between Switzerland and the United Kingdom are to be further deepened and expanded, particularly in the areas of trade, financial services, research and innovation, mobility and foreign policy cooperation. The Federal Council approved this move at its meeting on 13 April.

On Thursday, both sides praised the quality of bilateral relations based on shared values and leadership in research, education and innovation. The joint declaration continues a long tradition, they said. "This is a roadmap for strengthening cooperation between our countries - a process that is already in full swing," said President Cassis.

The UK is Switzerland's eighth most important trading partner (excluding precious metals). Exploratory talks are now to be held to examine whether and how the existing trade agreement can be modernised and broadened, for example in areas such as services, the protection of intellectual property, trade and sustainable development. A further important topic of discussion was the expansion of bilateral cooperation in the areas of research, innovation and technology. A Memorandum of Understanding covering specific areas of cooperation is being drawn up and it is hoped that it will be ready to sign in the next few months, as agreed by Federal Councillor Guy Parmelin and the UK Minister for Science, Research and Innovation, George Freeman, in February.

A key part of the discussions was devoted to the war in Ukraine and its consequences. In a joint statement, President Cassis and Prime Minister Johnson emphasised their dismay at attacks on civilian facilities and condemned the violations of international law and humanitarian law. They also addressed the implementation of the respective sanctions and how to ensure humanitarian aid for the people of Ukraine. The Ukraine Conference set to take place in Lugano in July, which is being jointly organised by Switzerland and Ukraine, was also discussed. In addition, in view of the current energy crisis, they touched on the envisaged energy dialogue, which is due to take place between Federal Councillor Simonetta Sommaruga and the UK Minister for Energy, Clean Growth and Climate Change, Greg Hands, in the near future.