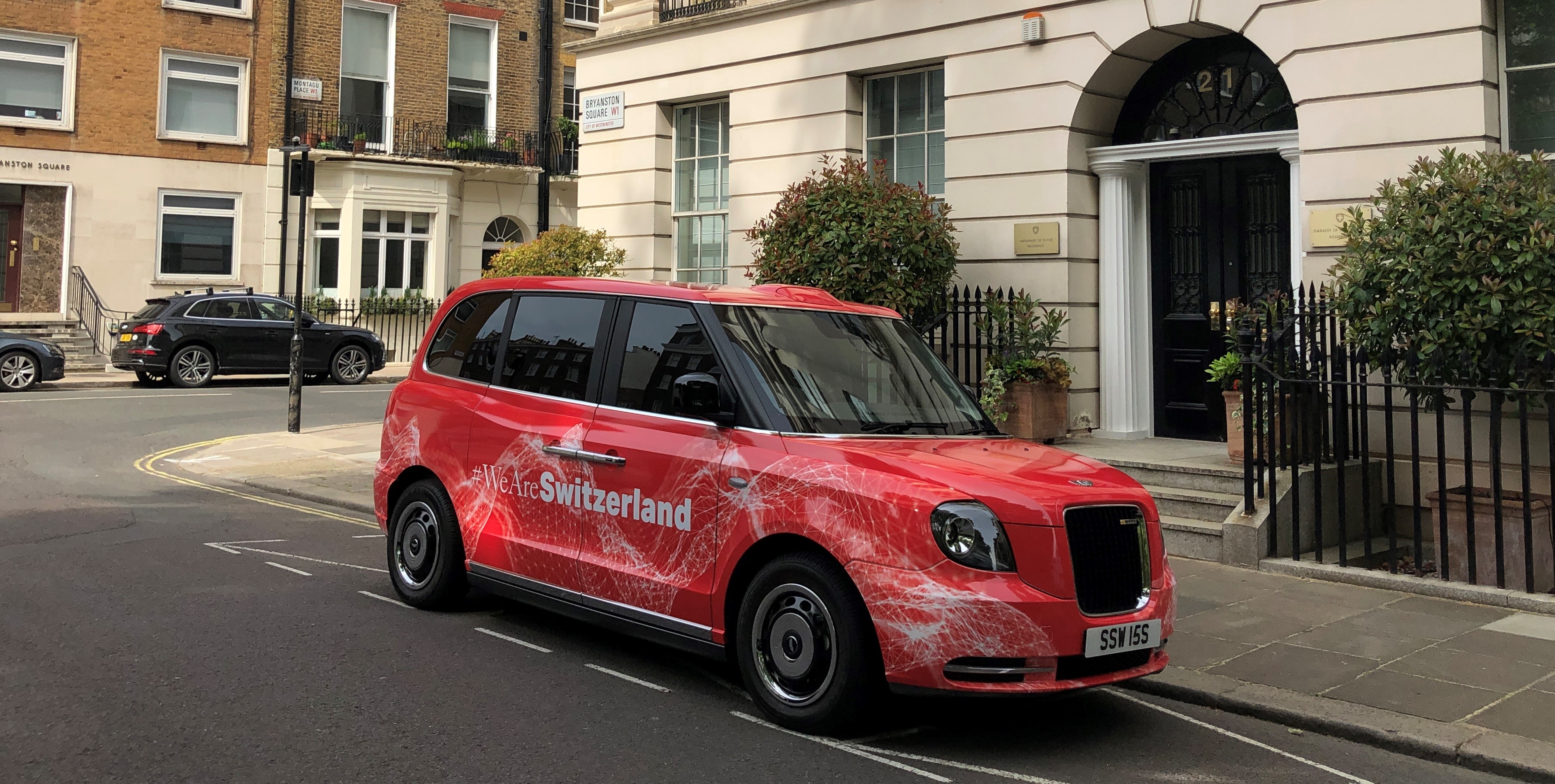 Tour of the UK - Summary of First Leg

Tour of the UK - Summary of First Leg

From 6-17 June the first leg of our #WeAreSwitzerland tour of the UK took place, with our electric-powered Swiss cab travelling to Cambridge, Birmingham, Edinburgh, Belfast and Manchester for events and meetings highlighting the many links and partnerships between Switzerland and the UK.

The tour began in Cambridge, where our Swiss Business Hub held an event in partnership with Switzerland Global Enterprise on the cell and gene therapy ecosystem in Switzerland and the UK, where we heard examples of best practice from both countries and future ambitions for the sector. We also held a foreign policy event with Cambridge University's Centre for Geopolitics on the future of neutrality and Switzerland's approach to the issue, and Ambassador Markus Leitner hosted a dinner with Cambridge University's Vice-Chancellor Professor Stephen Toope and Swiss university leaders to discuss academic collaboration.

Our Swiss cab then moved on to Birmingham, where Deputy Ambassador Chantal Moser met with the West Midlands Growth Company and Birmingham City Council to discuss trade and investment, levelling up and the potential for future collaboration between Swiss stakeholders and Birmingham and the wider West Midlands. Our Swiss Business Hub also held an event with Switzerland Global Enterprise, co-hosted with PwC UK at their Birmingham offices, on sustainable mobility and reducing the carbon footprint of transport.

In Edinburgh, we had a series of political meetings with Scotland's Cabinet Secretary for the Constitution and External Affairs Angus Robertson, Opposition Chief Whip Stephen Kerr, Presiding Officer Alison Johnstone and First Minister Nicola Sturgeon, where we discussed Swiss-Scottish relations and areas of mutual interest. Our Swiss Business Hub also co-hosted an event with The Astro Agency on space technology, to highlight how Switzerland and Scotland are both leaders in the sector, and we held an event on ESG investing in partnership with the British-Swiss Chamber of Commerce, the Chartered Institute of Taxation, the Edinburgh Tax Network and Terra Firma Chambers. While we were in Edinburgh Ambassador Markus Leitner also officially opened the Swiss software development and engineering company Zuhlke's new offices in the city, along with Scotland's Cabinet Secretary for Finance and Economy Kate Forbes.

We then travelled across the sea to Belfast for the second leg of the tour, where our Deputy Ambassador Chantal Moser had a series of political meetings with the leadership of several of the parties in Northern Ireland and the Speaker of the Northern Ireland Assembly Alex Maskey. We also had an insightful rountable discussion at Queen's University Belfast with Professor David Phinnemore and academic, civil society and business representatives to discuss the Swiss-UK relationship and current issues in Northern Ireland. Belfast also saw the launch of the latest link in the largest human chain in the world, with the installation of the Beyond Walls fresco by the Swiss-French artist Saype on the grounds of the Stormont Estate as part of the Belfast Photo Festival.

The Swiss cab then made its way back across the sea to Manchester, where Deputy Ambassador Moser gave a presentation to students at Manchester University on Switzerland's foreign policy, Swiss-UK bilateral relations and the Swiss approach to neutrality. The Deputy Ambassador also met with the Mayor of Greater Manchester Andy Burnham for an exchange on levelling up and business opportunities for Swiss companies. The Mayor then gave the keynote speech at our event on Switzerland's economic footprint in the Northern Powerhouse, held in partnership with the British-Swiss Chamber of Commerce and hosted by Hilti at their Manchester offices, where we also heard from the Swiss companies Endress+Hauser and Landis+Gyr about their investments in research and development in the Greater Manchester area.

The first leg of the tour also gave us the opportunity to reconnect with the vibrant Swiss communities present in Edinburgh, Belfast and Manchester, where we held pub quizzes in each city which were well-attended and contested in a competitive but friendly manner!

Next week the second leg of the tour will take us on to Bristol, Cardiff and Oxford for a series of engagements.